NOTE: If you have not yet read part 1 of Pat’s incredible story, I suggest you go here and read it first. (You’ll be glad you did!)

As we left off in part one, Pat and Shielagh Clark were ready to throw in the towel on their cleaning business. In fact, Pat had already sent in an application with the railroad. If it wasn’t for a Winston Churchill saying that kept popping up all around them – “Never, never, never give up!” – their story might have been very different.

But in 2010, in a desperate act of faith, Pat and Shielagh spent their last $4,000 and hired AC Lockyer as a business coach. “I could clean, and I could talk to people. But I knew nothing about running a business.”

AC first met with the couple in December 2010. He taught Pat about marketing and helped him set up a business plan. Pat took the plan and ran with it. In January 2011, he put out about 1,000 flyers per week. That January, Precision Pro Wash LLC brought in $15,000 – more than triple what they would normally see in a good January.

But that was just the beginning. 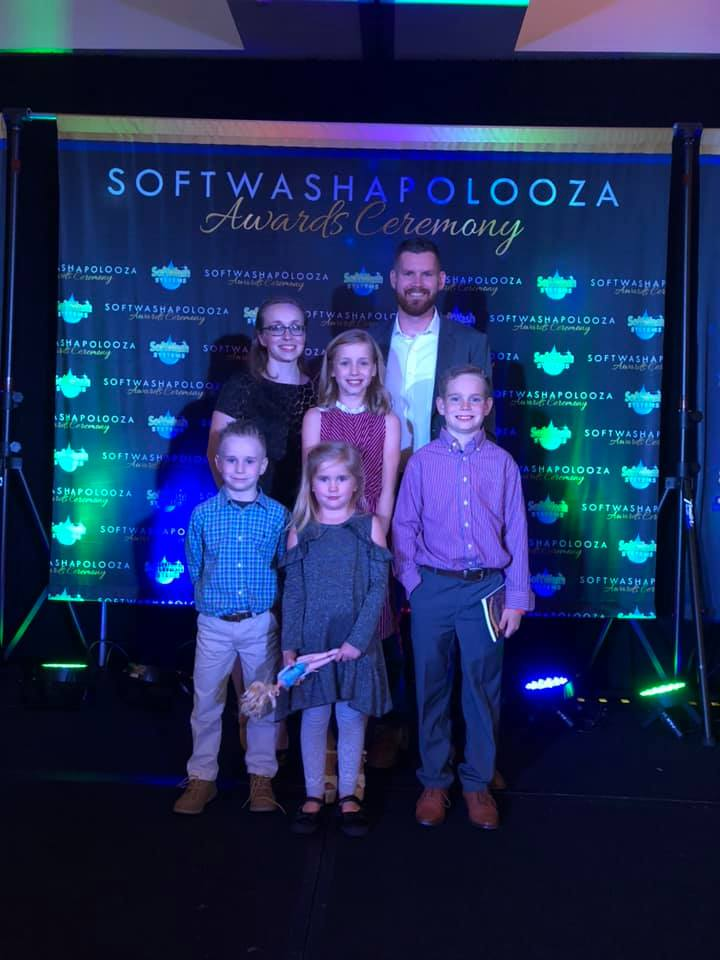 That January-2011 success was the start of a “paradigm shift” in Pat’s way of thinking. He was no longer just a guy who knew how to clean; he was a business owner and entrepreneur. Through his work with AC as well as other coaches – and through a lot of lessons from the “school of hard knocks” – Pat learned how to overcome numerous business-related hurdles. Here are just a few:

1. Money. Pat realizes now he was initially afraid of growth, and that stifled his business early on. “Money honestly kind of scared me. I didn’t want people to think differently of me if I started making money.” But money is a big part of business, so it was something he needed to embrace. “I learned a lot by messing up, such as not managing my money or spending too much in marketing.”

2. Hiring Staff. Early in his company’s growth, he hired some “not so good people” who didn’t care about the company or the company’s vision. “I’d never hired anyone. I was always an employee. I didn‘t do background checks at the beginning. I was hiring family, then whoever I could. You’re breathing? Good! You’re hired.” He also hired some bad people “who didn’t seem bad at the time,” including an office worker with a negative attitude, and some sketchy technicians. “You know, the ones who later call you up and say they’re going to meet you at the office with a baseball bat.” With that, he also had to learn how to let people go. “That was another huge business lesson. Today, he’s reworked his hiring processes, using things like Ask the Seal and DISC (personality) profiles before hiring.

3. Management: Hiring his team was only half the battle. He also has to manage them. “I am young but I look even younger. I actually grew a beard to help me look older so my employees would take me seriously.” Especially in the early days, Pat made sure his team saw all the hard work he put into the business every single day. That’s part of what he calls “casting the vision” for his employees – making sure they are properly and regularly trained on every aspect of their job and the company’s vision. He holds regular staff meetings to keep his team on the same page and on board with the company’s vision.

4. Sales. “I was the worst person in sales ever. I wanted to help everyone, and I thought everyone was my customer.” So he would listen to sob stories and take jobs for a fraction of what he needed to charge. Pat eventually learned that not everyone was going to be his customer, and not every customer was going to care about him personally. “I needed to develop thicker skin and I needed to serve my business. It took me awhile to recognize my business was actually a dot-com, not a dot-org.”

By better serving his business, Pat realized now he is actually better servicing his customers and community. “For me, it’s never been all about making money. At the end of the day, it’s about the customer, serving the community, and helping people. At first, I didn’t want to rip anyone off. Now I see that I’m actually serving them at a higher level by being able to afford better equipment, better staff, better chemicals, and better customer service. My business is my ministry, but there are other ways I can serve through my business than by taking every job that comes my way.”

5. Systems. Pat admits he has made a lot of mistakes and had a lot of setbacks, but he’s learned from them all. After a mistake occurs, he stops to study what can be done to keep it from happening again – then he sets up a system. “Every time we made a mistake, we would learn, become a problem solver, then put another form in place.”

Today, Pat’s business is largely turnkey. In fact, last fall Pat broke his leg in a biking accident and was out of the office for 10 solid weeks. “If that had happened three years ago, it would have likely been the end of us.”

If you remember back to part 1, Pat was tested in elementary school and told he had an IQ of just 56. Today he runs a multi-million dollar business. “Looking back, every little thing I went through was a building block to where I am today.” Here are some of his takeaways:

Today, Pat considers himself to be “super blessed” as he’s faced so many challenges over the years and things he had to overcome.

“Growing up in a trailer park, I never imagined this is where my life would be. I figured I’d just have a job working for someone somewhere. I wanted to be a diesel mechanic. It’s amazing where I’ve ended up. I truly believe if this could happen to me, it can happen to anyone.”